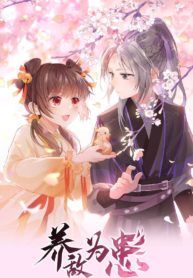 Ye Mu transmigrated into a book as a tragic cannon fodder, who was supposed to support the female lead. But having no time for games, she decided to kill the male lead and let the world collapse so that she could escape! One look at the scrawny little boy in front of her and she couldn‘t do it anymore…what should she do? Raise the male lead up and let him help her? The idea is great! But as she raised him the male seemed to have grown devious! Ye Mu was tearful. Where did her upright protector go to? Could she restart again?